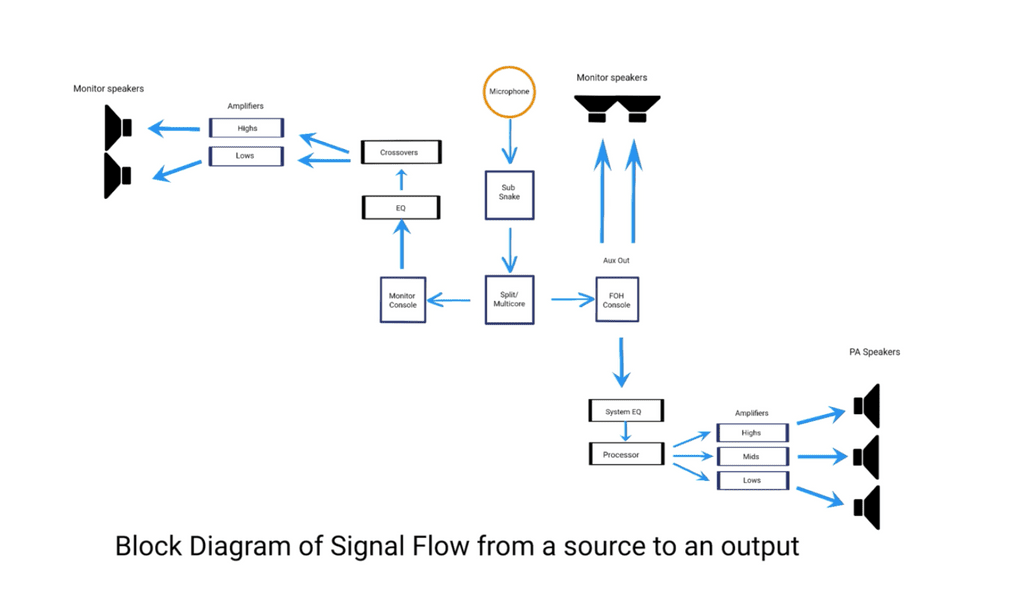 Understanding how signal flow works can help you troubleshoot and fix technical problems faster when recording or mixing music. Here, we’re breaking down all the essential parts of signal flow you need to know to fully understand the important role it plays in audio.


What is Signal Flow?

Signal flow is the path sound travels before you hear it. In other words, sound has to travel through different stages of your system, starting with the input and ending with the output. Think of sound as having to flow and travel from, say, a mic, before it gets to the speakers or headphones. Imagine sound coming in from one end (the source), and then making a few stops along the way before it reaches your ears. In some instances, signal flow can easily be traced by simply walking through the steps of your audio set up.


But what happens when something goes wrong and you can’t quickly identify the problem? Generally, the signal flow of your setup will vary based on whether you’re recording or mixing music - and understanding your flow is key to solving any problems that may arise.


Why Does Signal Flow Matter?

Signal flow matters because it’s all about knowing where to look when those inevitable issues pop up (for example, if the signal doesn’t reach the desired output). If you don’t know where to look, it means you’ll waste valuable time trying to troubleshoot and fix the problem. Worse, your actions might even end up being counterproductive, causing a longer recovery time before you’re back in business. This is especially true if you’re dealing with a large set up and multiple components.


Understanding signal flow when mixing means you’re more likely to get the best sound quality, since you’ll be able to optimize the order of your effects.


It’s pretty clear that knowing the signal flow of your setup is a big deal, especially when you consider that problems are prone to occasionally happen from time to time when you’re dealing with audio. A proper, full understanding of how audio signal flow works means you can save both face and time!

Truly understanding audio signal flow is much easier if you can visualize the signal flow path. So, let’s take a look at the simplest signal flow for recording to get started. As shown in the image below, you’ll be dealing with - at the very least - a few basics: a mic, audio interface, computer and headphones. Often audio signal flow comes into play either recording or mixing. So it’s important to know how these two things compare. You’ve already learned about signal flow while recording in the section above.


To recap, you get the input stage where the sound source (either vocals or instrument) is picked up by the microphone, pre-amplified, converted to digital audio and then sent as data to your computer. For the output stage, the processed digital signal is converted back to physical sound where it then moves from the audio interface to speakers or headphones.


However, when it comes to signal flow while mixing, the audio signal is sent to the mixing console’s channel via USB. Inserts are then used to insert things like compression, EQ and effects into the signal pathway. After the audio signal is adjusted to the correct level and amplified, audio then flows through the DAW to the audio interface, where it travels out of the mixer through headphones or speakers as sound. In a nutshell, understanding audio signal flow is important if you want to produce high-quality recordings and mixes. It’s also essential to have a firm grasp of your signal flow so you are better-able to effectively and easily troubleshoot when needed. Since you now know what signal flow is, why it’s important and how it works for both recording and mixing, go ahead and put your newfound knowledge to the test!


Ready to get in the studio? Check out Seismic Audio for all your live audio, sound recording and mixing needs. We’ve got amps, indoor and outdoor speakers, live music equipment and so much more

A well-made stage plot goes hand in hand with a successful live show. Not only does it keep your band organized, but it also ensures you have good communication with your venues prior to your...

A subwoofer can enhance your sound system and create a great entertainment experience. However, it’s only by understanding optimal subwoofer placement that you’ll get the sound results you’re looking for. We’re helping you find that...

Gain Structure 101 Looking for a master class on gain structure? You’ve landed in the right spot! Here, we’re covering everything you’ll ever need to know about how gain works, including what it means in...

Your browser is out of date, and may not be compatible with our website.

You can update your browser from the link below.

Download the latest version of your prefered browser
Your are successfully subscribed for email notifications.
✖

Notify me when available

We will send you a notification as soon as this product is available again.

Your email is requried